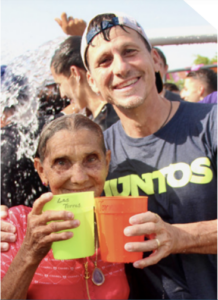 In the pages that follow, you will see a lot of progress. 2017 was awesome! We love progress, but we love people even more. Why? Because behind every bit of progress is a person that God created in His image. For this reason, Jesus asked us to love one another and to look out for each other

That is why we love the Spanish word JUNTOS (together) so much. It describes how you have come alongside to help Doña Liliam and her great-great grandchildren taste clean water for the first time. It explains why a ditch-witch can’t replace the time spent digging a water line with her, and learning what it is like to be in her shoes. Juntos is a theme at the center of the Lopez Family story (page 8), who are experiencing transformation through Plan 7, our community development model.

You have loved people well in 2017. This is why so much progress has been made. The future is bright in Nicaragua, and in our world. As you read through this annual report, enjoy the good that you made happen, and know that, juntos, we have shined our lights so that our Father in Heaven will be glorified.

Thanks for being part of our family,

Leadership
● 265 community leaders were trained, equipped, and encouraged to lead 18 communities in life transformation.
● Community leaders received regular TRAINING on water system maintenance, finances, leadership & motivation, and community development.
Water
● A new Modern Bathroom design was developed by our infrastructure team to make the construction process more efficient and the structure safer. ● 110,247,217 gallons of clean water 1200 families.
● 113 Modern Bathrooms were built with rural families. ● 2 water systems were completed in Las Torres and Matilde, serving 109 families.
Health
● 2,645 urine and stool samples were collected to diagnose, treat, and further prevent kidney disease and parasites. ● 637 home visits were made to destroy disease-ridden latrines and promote bathroom cleanliness and personal hygiene. ● 28 Clean Air Kitchens were constructed with rural families ● A landmark agreement was forged with the Nicaraguan Ministry of Health. The partnership will test for and educate families on 3 easily preventable diseases: intestinal parasites, kidney disease, and respiratory disease due to smoke inhalation while cooking. The ultimate goal is disease eradication.
Education
● Partnership with the Nicaraguan Ministry of Education strengthened, in which Amigos is now training 17 teachers and 2 principles in learning methodologies. ● 2 new schools opened their doors in La Chuscada and San Marcos. ● 6 additional classrooms were built in El Chonco to accommodate the increased attendance. ● 11 scholarship students graduated from high school or university. ● Creation Club, an after school program, was launched to serve 500 children in reading comprehension. ● 135 students received scholarships to attend high school and university and served their local communities by completing 8,420 service hours. ● 216,000 healthy meals were served to more than 600 students in 4 primary schools.
Economic Development
● 140 families benefited from capital in the form of chickens and pigs. ● 50 families received micro loans to invest in their small businesses. ● The Organic Pitahaya (Dragon Fruit) project kicked off with 7,200 plants growing across 4 farms.
Missions
● 1,630 volunteers served alongside their Nicaraguan brothers and sisters. ● 245 evenings were spent in the peaceful rancho, reflecting on and worshipping a God who loves us more than we can imagine. ● Juntos, a mantra meaning “together,” united the greater Amigos Family consisting of 24,857 supporters, 8,634 community members, and 108 Amigos Team members. ● Approximately 16,300 peanut butter and jelly sandwiches were consumed at local worksites. ● A collective 3,892,440 feet were climbed to the beautiful summit of Cerro Negro volcano. ● Countless friendships were made that endure thousands of miles and awkward language barriers.
Program Support
● Charity Navigator awarded Amigos for Christ with 4 Stars, a Perfect 100 in Financial Health and Accountability and Transparency, and a spot in the Top 10 List of Highly Rated Charities Relying on Private Contributions. ● Our Georgia Office moved into a new home office. ● $3,186,198 were given by generous donors whose support allows Amigos to pursue growth and excellence as we carry out our mission.
Previous
Next